The paper titled "Lessons Learned from the Deployment of a Long-term Autonomous Robot as Companion in Physical Therapy for Older Adults with Dementia: A Mixed Methods Study", authored by STRANDS members Denise Hebesberger (STRANDS partner AAF), Christian Dondrup (UOL) , Tobias Koertner (AAF), Christoph Gisinger (AAF), and Juergen Pripfl (AAF) presents findings from the long-term deployment of a STRANDS robot in the Austrian Care Home "Haus der Barmherzigkeit" during the second year of the project. It focused on the analysis of one of the robot's tasks, namely the so-called "walking group", an implementation of occupational therapy developed in collaboration with the therapists on site.

The eldercare sector is a promising deployment area for robotics where robots can support staff and help to bridge the predicted staff-shortage. A requirement analysis showed that one field of robot deployment could be supporting physical therapy of older adults with advanced dementia. To explore this possibility, a long-term autonomous robot was deployed as a walking group assistant at a care site for the first time. The robot accompanied two weekly walking groups for a month, offering visual and acoustic stimulation. Therapists' experience, the robot's influence on the dynamic of the group and the therapists' estimation of the robot's utility were assessed by a mixed methods design consisting of observations, interviews and rating scales. Findings suggest that a robot has the potential to enhance motivation, group coherence and also mood within the walking group. Furthermore, older adults show curiosity and openness towards the robot. However, robustness and reliability of the system must be high, otherwise technical problems quickly turn the robot from a useful assistant into a source of additional workload and exhaustion for therapists.

From 27th August to 31st August 2015, the STRANDS project organised the first "Summer School on Long-term Autonomy for Mobile Robots" (LAMoR) at the University of Lincoln, UK; co-located with the European Conference on Mobile Robots. 25 participants from all over Europe, selected from 49 applications following a rigorous review process, enjoyed exciting days of engaging research talks by STRANDS academics, robot hacking, networking among peers, and shared hands-on experience from the STRANDS robot practitioners. The summer school addressed a variety of topics, covering most of the research areas of STRANDS, such as 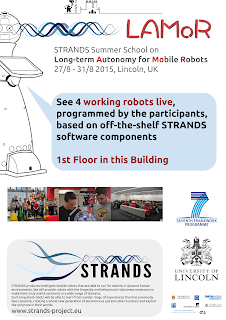 The school was composed of morning research presentations, followed by hands-on programming tutorials and exercises. Participants were then working in teams with one of four STRANDS robots each, made available for the summer school by the project consortium. Participants used the released software packages of the STRANDS project to implement four new robotic systems that were all successfully demonstrated and autonomously operating at the Welcome Reception of ECMR to more than 70 international researchers attending the conference. Applications developed on the robots by the participants ranged from robots that approached people to cheer them up telling jokes and tweeting their photo, an emotional robot that visitors could punish or pet, up to a robot that could re-identify participants by analysing their conference badges using computer vision techniques.

All the materials of the summer school are made publicly available on the project's GitHub repository, including the lecture slides and tutorials. These tutorials serve as an excellent starting point for anybody who is keen to use the software developed (usually ROS components) by the STRANDS project, which is all easily accessible, released as Ubuntu binary packages for installation within minutes. The consortium is very proud that 25 excellent early-career researchers were able to develop their own robotic systems with the software and tutorials provided in just four days of programming - from concept all the way to a robustly working system.
A lot of this excitement is shared by the participants, indicated in their shared their experience on Twitter and in their feedback:

...The fact that we could use the robots for the summer school was really awesome, thanks for setting up the software so everything ran more-or-less seamlessly...

... I just had a life time experience and great motivations for my future study and work...

...I greatly enjoyed the course and feel I have taken a great deal away from it and grown as a researcher as a result...

The consortium says thank you to all the extremely motivated researchers that made this event a great success. 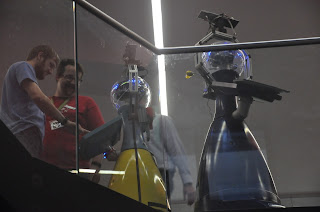 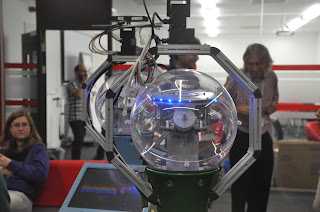 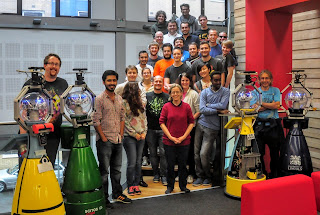 Posted by Marc Hanheide at 08:49 No comments:

The video about our STRANDS research on long-term robot localisation is an accepted entry to the AAAI 2015 video competition. Have a look and give your "thumb up" on youtube:

The associated research paper is available here.
Posted by Marc Hanheide at 07:40 No comments:

Henry nominated for robot of the year

Service robot Henryis nominated for the robot of the year.
The Robotics Award is one of the special awards of the futurezone Awards. From October 7 to October 30 futurezone-visitors can vote on their favorites.

for voting click here
Posted by STRANDS at 03:26 No comments:

The Lincoln team set off with their robot Linda for a school outreach event promoting Science, Technology, Engineering, and Maths at RAF Scampton to teach our future scientists about robots and the role they can play in security and care. The kids enjoyed learning about a robot's sensors, its ability to create maps and to navigate in populated environments first hand. Linda interacted with Jason Bradbury of the Gadget Show and Prof Brian Cox as well.

Posted by Marc Hanheide at 12:05 No comments:

Robot Linda will mingle with visitors at the Natural History Museum

Members of the public will have the opportunity to meet Linda the robot at a week-long celebration of university research at the Natural History Museum in London.
Linda is one of six robots involved the STRANDS project. Linda, who is based at the University of Lincoln, UK, will be mingling with visitors to the Museum from 9th to 13th June in the ‘Robots on Patrol’ exhibit.
The event is part of Universities Week 2014 which aims to increase public awareness of the wide and varied role of the UK’s universities. It will be an opportunity for the research team to showcase the robot and the latest development in STRANDS. Members of the STRANDS team from the Universities of Lincoln and Birmingham will be on hand throughout the week to explain Linda’s capabilities.
Dr Marc Hanheide, from the University of Lincoln, said: “The aim is to show members of the public how this sort of technology could help us in our everyday lives, assisting humans in basic activities allowing them to concentrate on more important aspects of their work."
“It’s not just about providing a care home or security robot. We are trying to enable robots to learn from their long-term experience and their perception of how the environment unfolds in time. It will have many possible applications and taking Linda to the Natural History Museum is a fantastic opportunity for people to see how robots like this will, one day, be able to aid and assist humans in a variety of roles.” Posted by Marc Hanheide at 14:01 No comments:

In March 2014, STRANDS will be helping to run the AAAI Symposium on Qualitative Representations for Robots. Qualitative representations are at the heart of our vision for long-term autonomy and long-term online learning, and this meeting will bring together experts in this field from across the world to present their latest work and discuss the problems of creating and using qualitative approaches on robots. The symposium will run in parallel, and share sessions, with the symposium on Knowledge Representation and Reasoning in Robotics which will also address many issues relevant to building intelligent, long-running service robots.

For more information see the symposium website and AAAI's 2014 Spring Symposia overview page.
Posted by Unknown at 05:40 No comments: